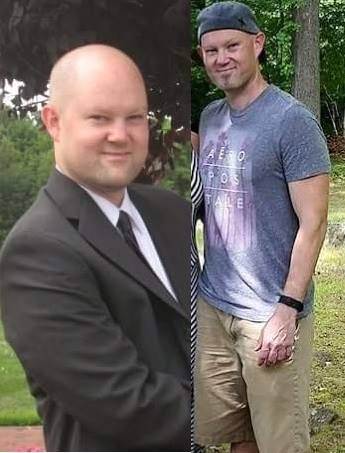 That was me on the left. I was in my mid 30’s and weighed close to 217 pounds. At that time, I used to smoke and drink excessively. I had poor health, and I was depressed. On the right, that is a current photo of me at the age of 42. I weigh 175 pounds with 15% body fat.

In my mid 30’s, I reached a point where I knew I needed to turn my life around. I decided to reach out for help. My close friend Larry, an exceptional personal trainer in New York City, shared some simple dieting tips with me. Implementing those tips was when my life started to change. Asking for help was the first step to starting a new life.

Reflecting on my past gives me a chance to see how much progress I have made over the last few years. I noticed that I had issues with my stomach since I was in elementary school. It started to affect me when I entered middle school. I started feeling awful when I ate something, and it got worse as I got older. It got to the point where a neighbor asked my Mom if I was anorexic. I didn’t feel comfortable leaving my home because my stomach would hurt after I ate.

I was 6’ (which I am now) and weighed 129 pounds. My parents started taking me to the top physicians in my city. Some doctors said I had IBS (Irritable Bowles Syndrome) while others said I had Crohn’s disease. The best opinion came from a doctor who said I had a “Nervous Stomach.” He told me that Citrucel would get my problem under control. I was excited to hear this, but I had my suspicions. His diagnosis didn’t fit the bill of those other issues.

I remember telling my Mom in my early 20’s that I didn’t drink every day because it would hurt my stomach. Wow, I couldn’t believe that was the only excuse for not picking up a bottle of alcohol! To be honest, that was the lowest point of my life.

Look at the picture of me at 217 pounds. I had two wonderful kids. Unfortunately, I was still smoking and drinking. During this period I discovered more foods that didn’t upset my stomach. I must point out that drinking was an outlet for the pain that I felt in my stomach. I later paid a heavy price for this type of behavior. I later found out that Gluten was the culprit.

When I took that picture, I decided it was time for me to take full control of my life. I wanted my kids to be proud of me. I started walking on my treadmill, jogging around the neighborhood and counting my calories. It is also worth mentioning that I was still drinking and smoking. Fate and life had other plans for me!

Around this time, I ran my own successful Web design company. A close friend of the family started a website called “GlutenFree Travel Site.” Their son was battling Celiac’s disease. They asked me if I could help them with their site. As they were telling me about the symptoms of Celiac’s disease, I wondered if I was suffering from the same illness. I decided to get tested for this serious health condition.

I must admit that I was nervous. Well, the blood test came back inconclusive. The Dr. did an endoscopy, and the results were negative. Two years would pass before I tried Gluten Free.

By now, I knew that something in my diet was upsetting my stomach. It had to be more than one thing. I knew that I would start feeling better once I eliminated the foods that were not good for my stomach.

I started experimenting with Vegan, Vegetarian, Raw, and Paleo diets. I got mixed results, but I was not at 100%. I finally tried the Gluten Free diet. Wow! My health began to improve dramatically. My energy level increased, my seasonal allergies disappeared, and I slept better at night. I managed to get down to 190 pounds but wanted more. I tracked my food every day, tried different boot camp classes, got a Fitbit and even started to cook more. I later became a personal trainer in my 40’s at SOLDIERFIT. We are named one of the 20 Best Workouts in American by Men’s Journal.

Finally, after discovering the MRT test, and learning about my food sensitivities. Everything in my life came into focus. Since then I have dedicated my life to physical fitness and educating people about dieting and eating.

I am a Level 1 Certified Nutrition Coach from Precision Nutrition and Smart Fitness certified personal trainer.